The hidden face of Janus 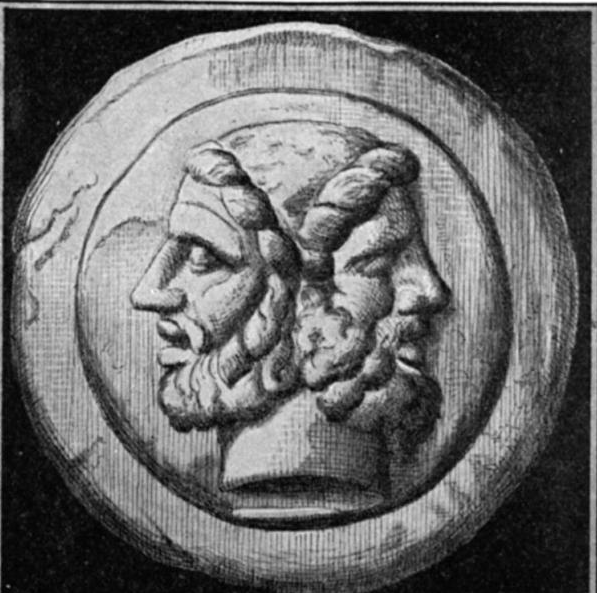 Janus, the god of beginnings and endings, his two-faced image decorating temple gates in ancient Rome, was a natural choice for biologists naming this strange new enzyme. For reasons imperfectly understood, this Janus Kinase, this JAK protein was able to both open and close vital organic processes including the production of blood.

A trio of recently published scientific papers has created an emerging portrait of the hidden face of the JAK2 kinase,  the mutation of which has produced untold misery including myeloproliferative neoplasm.

Sailing within the cellular cytoplasm, the Janus kinases – JAK1, JAK2, JAK3, and TYK2 – are linked double worlds: the kinase itself, JH1, whose job is to activate molecules (phosphorylating) through addition of a phosphorus element; and JH2, a pseudokinase whose function has been largely unknown until recently.

Joining this double JAK world is a thin leash of 30 or so amino acids also largely disregarded. Recent discovery that all the JAK2 mutations causing MPNs congregate at the pseudokinase gate at the end of that leash may have refocused attention on this juncture.

The JAK kinases remain inactive until signaled by a cytokine arriving at the cell’s surface.  Typically, the JAK2 kinase autophosphorylates – turns itself on – and activates receptors on the cell surface. These produce specific cytokine docking sites. In actuality, JAK2 kinases act in pairs (dimers) and one JAK2 kinase may phosphorylate and then activate the other.

The JAK2 enzyme then phosphorylates a STAT (Signaling Transducer and Activator of Transcription) molecule that in turn activates another STAT molecule. This joining of monomers is dimerization. The JAK2 enzyme then dephosphorylates freeing the dimerized STATS to translocate into the cell’s nucleus and convey the order to express the appropriate genes that initiate the protein production process.

A cartoon version of the way JAK2 works. It provides a useful chronology of events while masking the hidden face of the Janus kinase.

In the past decade, billions of dollars have been poured into drugs targeting the active JAK kinase in an effort to inhibit the effects of runaway MPN blood production – splenomegaly, fatigue, cachexia, hepatomegaly, pruritis, myelofibrosis and death. The common drug development strategy: Bind the active JAK kinase.

Ruxolitinib, FDA approved in 2011, proved successful in ameliorating the worst of symptoms and improving QOL without affecting the JAK2 allele burden or the underlying disease. Ruxo, along with JAK2 inhibitors in clinical trial –e.g., SAR302503, CYT387 – targeted the energy pocket, ATP, in the active kinase.

Drug designers reasoned that Type I inhibition, blocking the active JAK2 kinase’s ability to phosphorylate, should shut down the impact of the JAK v617F mutation.  And for a time, until JAK2 successfully resisted inhibition by recruiting other JAKs to complete its dimer, this approach worked in many myelofibrosis patients. It also produced severe anemia and thrombocytopenia side effects. And eventually lost effectiveness.

Many of the drawbacks of this Type I inhibition of mutated JAK2 appears to be minimized or eliminated altogether by targeting the inactive kinase, Type II inhibition. Stabilizing the inactive state of the JAK kinase leads to a loss of activation-loop phosphorylation. This is the focus of the CHZ868 paper

“Consistent with the in vitro data, in preclinical models of
Jak2V617F-induced PV and MPLW515L-induced MF, CHZ868
treatment reversed MPN hallmarks, including splenomegaly,
pathologic erythrocytosis, thrombocytosis, and leukocytosis
and alterations in bone marrow progenitor populations induced
by constitutive Jak2 or MPL mutant alleles. CHZ868 therapy
attenuated reticulin fibrosis, a key pathologic MF trait that persists
with chronic type I JAK inhibitor therapy. Most importantly,
CHZ868 therapy induced a significant decrease in mutant allele
burden in preclinical models of PV and MF based on an
increased susceptibility of Jak2V617F and MPLW515L cells
to CHZ868 in vitro and in vivo.”

The work of the Ross Levine (Sloan Kettering) and Thomas Radimerski (Novartis) labs published in Cancer Cell appears to usher in a new era of JAK2 inhibitor development. The reported effectiveness of CHZ868 in murine ex vivo and in vivo models is impressive

CHZ868 is a Type II JAK inhibitor that binds JAK2 in its inactive state. In animal and tissue studies, CHZ868 was effective in overcoming JAK2 cellular  resistance to ruxolitinib and similar Type I JAK inhibitors. It preferentially targets the JAK2 V617F mutated cells versus the wild type JAK2, suppressing JAK signalling and proliferation of mutant cells and induces cellular death of mutated JAK2 cells while reducing overall allele burden in murine MPN models.

Type I JAK2 inhibition, stabilizing the kinase in its active phosphorylated state by cutting off access to ATP, does block the kinase function but also increases activation loop activity.

In the effort to reduce excess blood production this is a bit like putting on the brakes while pressing the gas pedal to the floor.

Many of the drawbacks of this Type I inhibition of mutated JAK2 appear to be minimized or eliminated altogether by targeting the inactive kinase, Type II inhibition. Stabilizing the inactive state of the JAK kinase leads to a loss of activation-loop phosphorylation.

Here’s the JAK2 activation loop in contact with the v617F mutation.

Legend:
Molecular model of the autoinhibitory interaction between the pseudokinase domain (JH2) and the kinase domain (JH1) of JAK2. Select MPN mutations are shown in pink, and the location of the predominant MPN mutation in JH2, V617F, is shown by the arrow. The activation loop of JH1 is colored red, the linker between JH2 and JH1 is colored gray, and the linker leading into JH2 is colored green. The two phosphorylation sites in JH2, which help maintain the autoinhibitory state, are shown in stick representation, with the phosphate group colored red (oxygen) and black (phosphorus).

The power of the pseudokinase

Following a different path, Stevan Hubbard (Skirball Institute, New York University), Olli Silvennoinen (University of Tampere, Finland)  and their associates  explored the molecular underbelly of the JAK2 linked worlds. In the process they appear to have uncovered critical inhibition functions of the pseudokinase through structural regulation of JH1 by JH2. Through a novel molecular-docking simulation, Hubbard and his colleagues determined how the pseudokinase domain interacts with the kinase domain to inhibit the latter. Nearly all of the mapped MPN disease mutations were found in or near the interdomain interface.

The impact on pseudokinase inhibition of the kinase is significant.

“One way to think about it,” says Hubbard,

“is that the kinase (JH1) has more three dimensional freedom if it’s not interacting with the pseudokinase (JH2). And that comes about because the mutation has loosened up the interaction. There’s a linker between the domains that’s about 30 amino acids long, so it isn’t going to wander too far.”

The molecular dynamics study that formed the  basis of  The Nature Structure and Molecular Biology paper that appeared last year was without precedent. Hubbard and his associates relied on Newton’s laws of motion. “We knew the structure of the JAK2 kinase and pseudokinase from x-ray crystallography studies. We undertook a docking study essentially moving the two together, stopping and recalculating the positions and forces on all of the atoms on a very short time scale.  Our results were confirmed through a crystallographic study of the fourth JAK kinase, TYK2,  published at approximately the same time.”

The TYK2 JAK kinase study that confirmed Hubbard’s simulation was the experiemental work of a Genentech group (Lupardus, et. al, op.cit.)  Through x-ray crystallography of the two domain JAK family structure… uncovered an inhibitory interaction interface between the two domains. The MPN mutations found in JAK2 map to this inhibitory interaction site causing activation of the kinase.

“We find that the pseudokinase and kinase interact near the kinase active site and that most reported mutations in cancer-associated JAK alleles cluster in or near this interface. Mutation of residues near the TYK2 interface that are analogous to those in cancer-associated JAK alleles, including the V617F and “exon 12” JAK2 mutations, results in increased kinase activity in vitro. These data indicate that JAK pseudokinases are autoinhibitory domains that hold the kinase domain inactive until receptor dimerization stimulates transition to an active state.”

Taken together, these three papers advance our understanding of the dynamic at work in the interrelationship of the JAK domains and point to future therapeutic  targeting options.

Related:  PNAS, “ATP binding to the pseudokinase domain of JAK2 is critical for pathogenic activation.” (April, 2015)

A VIDEO PRESENTATION OF THE FUNCTION OF THE JAK2 PSEUDOKINASE BY PROFESSOR OLLI SILVENNOINEN.